Graviera Naxou (Naxos Graviera) P.D.O. (Protected Destination of Origin) is, without a doubt, the flagship of the production and the greatest pride of the Union of Agricultural Cooperatives of Naxos!

This hard cheese has golden yellow color and thin dry skin on the outside and solid elastic mass and scattered small holes on the inside. Also, it has fine aroma, sweet and delicate taste and a characteristic aftertaste. Moreover, it has gained reputation as one of the two main products of our island (the other one is Patata Naxou –Naxos potato– P.G.I.) and also one of the finest Greek cheeses, while it can be used as a table cheese, for rubbing, for saganaki and in many other ways.

One other of Graviera Naxou P.D.O.’s qualities is that it is rich in calcium (eleven kilos of milk are used to produce one kilo of cheese) and it has been characterized by many scientists and institutes as one of the most appropriate cheeses for consumption by young ages, as it provides valuable help to their growth. Graviera Naxou P.D.O. is produced from 80% cow milk at minimum and 20% sheep and goat milk at maximum, with the addition of traditional rennet.

E.A.S. Naxos produces approximately 1,200 tons of the famous Graviera Naxou P.D.O. annually. It makes this fine cheese using milk exclusively from animals which live and have been bred on our island, following the rules of traditional cheese making at all stages of the process; moreover, as it does in the production of all its other cheeses, E.A.S. Naxos strictly avoids addition of powder, preservatives, antibiotics and color matters, condensation and milk concentrate.

Finally, it would be unfortunate not to mention that E.A.S. Naxos’s Graviera Naxou P.D.O. is a highly decorated product, having won domestic and international prizes, which, of course, are a further proof of its great quality. It has won the Golden Taste Award at the 2011 Greek Cheese Festival, the two (2) Stars at the High Taste Contest at the iTQi Institute in Brussels in 2015, 2016 and 2018, while in 2017 it won the Golden Prize at the Taste Olymp Awards.

The production process of Graviera Naxou P.D.O. by E.A.S. Naxos is as follows:

The milk is collected at the local coolers and is transported with isothermal tanks to E.A.S. Naxos Milk Processing Plant and undergoes thorough inspections by our company’s chemists before entering the Plant’s premises.

After the checks are complete the milk is brought to the maintenance and storage tanks and then it is cleansed (for this process centrifugal force machines are used); after that, it goes for pasteurization. After pasteurization the raw material goes to the cheese maker, where the curd is formed. Then the curd is put into molds to take shape.

The next steps are the first change at the cheese worktable and the transportation of the molds to the press in order to extract the humidity from the cheese mass. Then the cheeses are formed and are “baptized” in brine – the duration of the wheels “baptism” in the brine depends on their size.

After the completion of this procedure the cheeses are brought to the ripening rooms, in which they remain on wooden shelves for at least 72 days under controlled temperature and humidity, gradually emitting their humidity. During this period consecutive turns of the wheels take place.

Things you should know:

Union of Agricultural Cooperatives of Naxos

Find us on the map 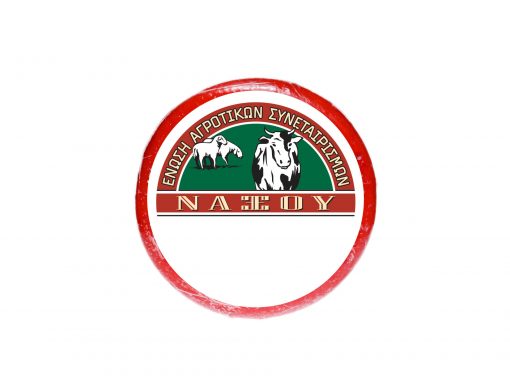